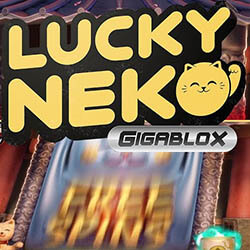 The Fortune Cat, or Maneki Neko, is a lucky cat charm very popular in Asian culture. It’s believed that they’re a talisman able to attract good luck and fortune for their owners, so they’re a pretty perfect symbol for a pokie! Lucky Neko: Gigablox is Yggdrasil Gaming’s pokie release for April and these mascots play a starring role.

You won’t need to make big wagers to play this pokie. You can choose between 8 coins of different value to create stakes of anything between NZ$0.7 and NZ$100 per spin. The word Gigablox is appended to the game title because of 2X2, 3X3, and 4X4 symbols that occasionally appear on the reels, larger versions of the regular icons already functional. When you’re in the Free Spins mode, these swell to 6X6 in size because of the larger game area!

Wild symbols appear in both the base game and the Free Spins round. You’ll need 5 of the Lucky Cat icons to get to the latter, and each one will get you 5 complimentary rounds. The highest possible amount of these you can get is 16, possible thanks to the Gigablox.

The game area boosts here, to 6X8 symbols and 85 lines instead of the standard 40. Bigger Gigablox symbols appear now, along with a randomly chosen Blessed icon which will pay you 5X what you would get in the Lucky Neko: Gigablox base game.