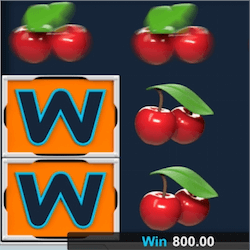 For fans of classic fruit machines, Realistic Games have revealed their new Win Sprint pokie. It has been designed on the HTML format which means it will be available for both mobile and desktop play.

Realistic Games appear to have ad mobile devices in mind when they design Win Sprint as it looks perfect on Smartphones. Its clean and clear lines make it a breeze to play. CEO Andy Harris emphasises Win Sprint’s unique bonus features as the game’s main drawing factor.

The Win Sprint bonus game is triggered when you land the letters W, I and N in a row on the pokie’s three reels. A re-spin will instantly be triggered when this combination lands and a 1x win multiplier will be added with each re-spin.

Despite its basic approach to design, Win Sprint still has a few exciting features to make it stand out from the crowd. Its 95.25% Return To Player does put it below the industry average but it makes up for its volatility with its 250x you wager jackpot and a maximum accepted wager of 1000 per spin.

Realistic Games is a relatively new player in the gaming industry. They have previously focussed mostly on scratch card games, video pokies and table games.  At the moment they have 19 pokies in their library including Double Bubble and It Came From The Moon.

Realistic Games may not have the budget or staff that the big hitters like Microgaming and Playtech have, but they know how to make use of what they have, as all their titles so far have had high production values and intricate features.

Win Sprint harks back to a more basic Pokie design from the days of fruit machines but this is still an attractive style for many modern casino fans. The reel symbols included in this Pokie include the classic Lucky 7’s, Red Cherries, Plums , Golden Bells and more instantly recognisable fruit machine staples.

The pokie requires players to line up 3 symbols on the three reels to trigger wins which range between 1 and 10 for the basic symbols. Three of the Lucky 7 symbols are what awards the jackpot win in Win Sprint of 250 coins.

It is the first time that Realistic Games moves into classic Pokie territory and if Win Sprint is any indication of where their design is going, they are certain to have more success in such a competitive industry.