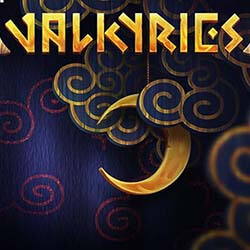 There’s a fresh new mythological online pokies adventure coming soon from Yggdrasil and Peter and Sons. Due for release this December, Valkyries will combine the best of Norse mythology and online casino entertainment.

It all comes with a standard 5×3 and 10 paylines game area. But where the magic truly starts to happen is with the maximum Jackpot. Valkyrie will make it possible for players to bank up to a larger-than-life 20,000x the value of their basegame wager, which has got to be the biggest we’ve encountered so far.

The bonus features are every bit as impressive as the Jackpot prize money. These include Locking Wilds, a Power Reel, Free Spins, a bonus Scatter symbol, and Dropping Wilds.

The Dropping Wilds are a great addition to the game as these make for random entertainment value. Instead of disappearing from sight after completing a winning combo, they drop down a single position on the reels with every subsequent spin, creating more wins as they go. Also, they’ve got a Multiplier value between 1x and 10x attached to them.

The Power Reel is an impressive feature in its own right. Triggered by landing two Scatters simultaneously, it will appear spinning in horizontal motion below the general game area. What’s more, aside from the additional ordinary wins, should the Power Reel be populated at any point by a Dropping Wild, the special bonus symbol will be instantly relocated to the top of the game area.

The Free Spins feature will be activated every time 3 or more Scatters appear simultaneously on the game area. Not only are 10 free games the reward, but also a Power Reel present for each free round.