Upcoming Legacy of the Tiger Pokie by Playtech 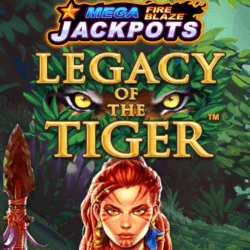 It’s easy to see why the jungle theme is so popular with pokie developers. It’s a place filled with captivating creatures, gorgeous greenery, and secretive sounds that game designers can put to great use when creating their alternate realities. Legacy of the Tiger fits neatly into this group with the fearsome predator named in the title featuring as the star of the show.

Playtech has chosen a 5X3 reel setup for Legacy of the Tiger and players will have 50 lines to form winning combinations on. Special Features include Fire Blaze Jackpots that could pay out as much as 2 000X the triggering bet, tiger Wilds, Free Spins, and a fiery, flame-haired female as the Scatter. Apart from the Grand Jackpot, there are three other fixed prizes available, the Major, which multiplies the active wager by 500X, the Minor, which increases the stake in play by 100X, and the Mini, which will boost bet returns by 20X.

The tiger Wilds can appear Stacked, so can cover reels fully as well as function as a substitute. Land at least three to have them pay out on their own, too. The beautiful woman Scatter icon landing 3 times will trigger the Free Spins.

The jungle setting has been brilliantly rendered by Playtech and a forest scene stands as the background for the Legacy of the Tiger reels. Then there are Royal symbols, carved from stone and covered by vines, along with crocodiles, monkeys, snakes, and toucans. The RTP is 96% for this medium-to-high variance pokie, and the betting range is TBA.