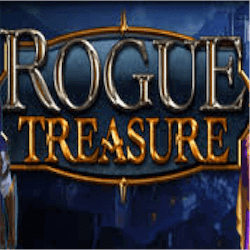 Chance Interactive was founded in 2014 and they are an Australian based developer. Even though they are quite a fresh face on the gaming scene, you would never guess so from their gaming output. This company is focused on online pokies and they have been consistently putting out some of the best pokies in the world.

Their releases look absolutely stunning and the features they pack into their titles makes players want to keep coming back for more rewards. One of their latest releases is a game called Rogue Treasure. It has a very medieval fantasy feel with the players taking on the role of an expert thief as they attempt to gain access to unprecedented riches.

The reels spin against a seemingly quite mountain village in the background. There are 25 paylines here that are spread across the 5×3 reels. The reel icons include the Rogue thief himself who acts like a wild, a door lock which acts like a scatter, a beautiful girl and a mean looking Baron. There is also a bag of gold icon and a knife.

Rogue Treasure has a unique respin feature with some added excitement. Respins are triggered randomly after any spin, and when the feature activates and there is a lock and Rogue symbol on the reels, the Rogue will attempt to pick the lock. If he succeeds then a random reel will become completely wild. Up to three reels can become wild, and if the feature re-triggers the reel to the right of the Wild reel will also become wild.

While Chance Interactive is still relatively new to the scene, they are one of the few developers that really know how to explore a theme. While some additional features would have been nice to have, this pokie is still extremely fun and very unique. There is just a great atmosphere present and at times this pokie feels like a tribute to the Assassins Creed videogames, which is no bad thing.