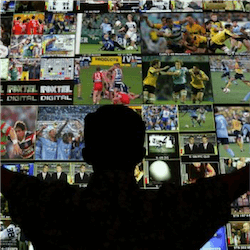 The UK media have taken it upon themselves to tackle what they see as an overstep by the gambling industry. Following a Sunday Times investigation there has been a lot of attention cast on how the gaming industry manages their advertising.

This week the BBC did an investigation and found that 95% of televised football matches have betting advertisements and they made up about 20% of all ads run on an individual show. For bigger matches like those aired for the Europa League featured ads that made up to 40% of the total ad runtime.

One of the biggest concerns in the UK with regard to this is the fact that almost all these televised events were run before the UK’s “Watershed” exemption where most censorship of television programs ends after a certain time at night. This means that children would be able to view the advertisements without much stopping them.

The biggest point of contention raised after the recent Sunday Times article is the fact that many opponents to online gambling claim that operators are targeting children in their marketing. The UK Gambling Commission along with the ASA and other market entities have sent an open letter requesting that gambling operators comply with new standards and measures set out to prevent endangering children or vulnerable individuals in their advertising.

There is currently a government review on the gambling industry in the UK. The UK has been seen as a haven for well regulated online gambling. The work the UKGC and local operators have done has created a friendly, reliable and safe online gambling environment. It is unfortunate that opponents to gambling now choose to attack advertising in the industry with quite fragile arguments.

The use by online casinos of animated characters in their slot games has been one of the areas of criticism, with people claiming that this makes gambling attractive to children. Now the right of gambling operators advertising their businesses at all is even being called into question.

It is very difficult to find fault in such a well-regulated market, but the Sunday Times and BBC seem to have found things to nitpick. Re-evaluating decade old laws and regulations is always a good idea, especially since there have been many new developments in the industry since the original online gambling laws were implemented. That said, many industry insiders feel these new media attacks are nothing more than a witch-hunt.