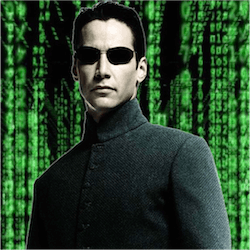 The Internet was lighting up in March when Warner Bros announced that they will be making a reboot of The Matrix. This much acclaimed film franchise set the box office alight with the first film still being hailed today as one of the greatest sci-fi action films of all time.

The film will feature the work of writer Zak Penn who has also done work on the X-men movies and a lot of work for Marvel Studios on films such as The Avengers and The Incredible Hulk. So far details are still very sketchy and there has been very little confirmed about the project.

Since the announced news came out it seems certain companies have been hard at work acquiring licensing deals with Warner Bros. It has also been revealed that Playtech have released a pokie based on the original film series, simply called The Matrix.

This was a great move by Playtech to secure some rights for the franchise before new film details emerge. The reboot is sure to be a sure fire hit as there is a massive fan base clamouring for any film tie-ins.

A Faithful Yet Original Slot

The Matrix makes liberal use of the iconic imagery from the movie franchise. You can see the classic Matrix machine code running in the background of the slot reels while you play. The on-reel symbols are made of unique and original icons like a black cat wild symbol that makes a reference to glitches in The Matrix. You will also see the famous characters including Neo, Trinity and Morpheus.

The Matrix makes full use of modern technology and the medium it is based on by including multiple clips from the hit film franchise. It will show iconic moments from the films that are tied in to the bonus features of this pokie.

The bonus features that are included allow players to select between 2 bonus rounds. You can either elect to receive 8 free spins with added Agent Smith symbols, who is the villain in the film series, or you can opt for the sticky wild bonus game that technically offers players unlimited free spins. Technically your free spins will end once a sticky wild appears one each reel.

You don’t have to be a fan of the films to appreciate this well made and well balanced pokie, but it would certainly help you to get the references and appreciate the efforts that Playtech has gone too to do the much loved films justice while still putting their own original stamp on things.