The Latest From Microgaming 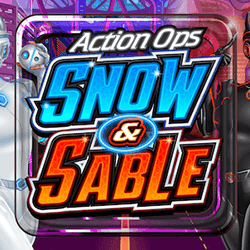 Action Ops: Snow & Sable is a sci-fi themed pokie from Triple Edge Studios. The game is set in the futuristic city of Aurora, where players are given the opportunity to get into the action with a crime-fight duo, allowing them to make use of the powers of their cyber agents to unveil the Mixed Wild Pays, Free spins, and Stacked Wilds. The two characters are features as wilds, and push most of the action forward by providing individual and mixed pays. Scatter symbols give the player a chance to access 10, 15, or 20 free spins by getting three, four, or five scatter symbols anywhere on the reels.

Their second game is a Wild West-themed pokie in the form of Showdown Saloon, developed by Fortune Factory Studios.

Set in the dusty frontier, the five-reel, 15 payline pokie puts players in an old-style saloon that is immersed in fast-paced wild west action. Some of the features part of the game includes pattern-based Mystery Stacks, free Spins, and Re-spins.

Large Mystery Stacks are automatically loaded on every reel, while each reel’s Mystery Stack is taken over by a single symbol, with a maximum of three different symbols that can be used as substitutes across all five of the reels. The Re-spin feature is triggered when the full symbol stacks of the same symbol land on reels one or two.