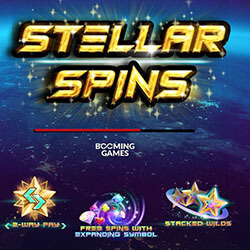 This brand new pokie, which is cited for release sometime in March 2019, is a space-themed game developed and distributed by Booming Games, who have been hard at work expanding their current library of games. The game has a mixture of classic and space themes, and sees the symbols as a variety of previous gems on a background overlooking the earth.

Gameplay is based off of fruit machines, aimed at those that prefer simpler, classic pokies, and features 5 reels and 10 paylines. The game also gives the player the chance to win through bonus symbols, scatters, wilds, and free spins, along with a $250,000 jackpot which the game promises can be won during a single round.

The first feature to consider is the stacked wild, and is represented in the game as a golden Star with the wild logo on its front, making it easy to spot straight away. The symbol can be used as a substitute, allowing the player to complete combinations on the reels that would otherwise not work. And although it can be enormously helpful, it can only be found on reel three. The special symbol in the game is a 2-Way pay trigger, which triggers a winning mode for 10 spins, where combinations can work both ways.

Three free spin symbols are required in order to make use of the 8 free spins that come with them, along with the expanding symbol that can expand and take over entire columns, increasing the chances of success.