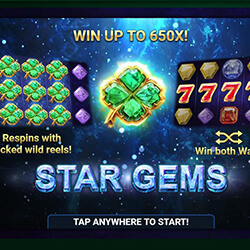 Star Gems 5 is a sequel to an online pokie that was released by Booongo in 2018, and comes packed with even  more features than its predecessor. It comes with classic symbols and gems, and offers a high RTP along with five different, expanding wilds, respins, and a jackpot of 1500x the stake, all of which takes place across 10 active lines and 5 reels. The developer has claimed that the game comes with SuperMegaBigWins of up to 1500x the stake, which they say is much more generous than their title from last year.

Expanding wilds are the main feature of Star Gems 5, which work alongside respins. There are 5 wilds and 4 respins, rather than the 3 wilds and 3 respins that were part of the original game. It starts with the player landing a single wild somewhere on the reels. This wild then has the ability to expand and take over the reel, which will give the player a free respins. The more wilds that appear, the more respins will be rewarded, with the most that a player can have at a single time is 5 respins triggered. The wilds that appear on the reels can also remain locked, which means that the player can get further respins for each.

It’s possible to have entire screen full of wilds, all of which can stack together to provide the player with many times the stake they lay down in the beginning.