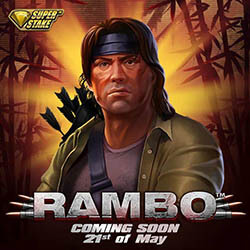 It looks like Stakelogic is getting a taste for branded pokies as the developer is following up in their series based on The Expendables with another hit from Sylvester Stallone’s body of work, Rambo. This title will feature the star’s image, albeit in a more cartoony way, but everyone’s thrilled at the prospect of this classic film being turned into a pokie.

Rambo will have the usual 5X3 reel format and players will be tasked with forming the standard combinations paying from left to right. Multipliers, Regular and Expanding Wilds, Respins, and Scatter symbols all feature and the RTP is 96.08% in this medium- to high-volatility title.

The TNT Wild is one of this pokie’s main attractions, regular-sized on certain reels but capable of Expanding on others, and bringing with it 3X Multipliers. The cobra Scatters can appear on all reels and are the key to the game’s Free Spins. Respins are offered first, however, allowing players to trigger additional symbols and so accumulate better rewards. After the Respins end, the Scatters expand, covering multiple positions on their reels.

The theme for Rambo looks inspired by the later films, not Stallone’s initial work in the 1982 film. The scene is set in a jungle and there’s a hut viewable in the background. Not all the icons are themed but the royal symbols have all been given a makeover and are presented riddled with bullet-holes. Images of the star himself, grenades, a machete, arrows, and boxes of ammunition all appear.