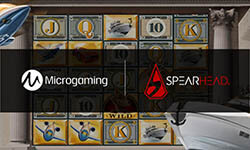 Spearhead through its new partnership with Microgaming will add its content into the popular aggregation platform. This will expose its brand to new and existing regulated markets online.

Some of the top titles from the development studio include Wilds of Wall Street and Book of Soul, which will be featured and available to Microgaming operator partners around the world.

Spearhead is a newly formed casino game maker and was created after EveryMatrix purchased the iGaming development studio GiG Games, from the Gaming Innovation Group (GiG). They did this in order to gain a foothold in the development sector with an already established studio and team.

Mathias Larsson, Spearhead Managing Director, has said that Spearhead are thrilled with the new alliance with Microgaming, especially as there is now a much wider online casino market which will be able to access the newly released titles from their studio. Overall, the company acknowledges that the new partnership will be a huge step in the right direction for them and will assist them in delivering content-specific casino games to a wider, regulated European network.

From Microgaming’s end, James Buchanan the Director of Global Operations has stated that the company are delighted to have Spearhead’s team on board and they look forward to adding a variety of titles to their platform.

Spearhead has another feather in their cap as they recently signed a similar deal with ORYX Gaming, for their content to appear on the content aggregators ORYX Hub, which has over 8,000 titles available.