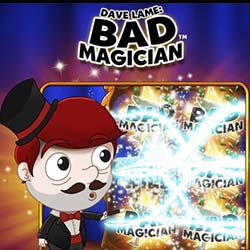 With the incredible variety of online pokies available across the iGaming landscape, it’s always refreshing to encounter something truly unique and different to the rest. And that’s exactly what Scientific Games’ new Dave Lame: Bad Magician promises to be.

Due for release later this month, the game is played on a 5×3 reels game area, and with a total of 20 fixed paylines. But while the game area appears to be the standard swing of things, the developer has included quite the mix of bonus features – along with a humorous and captivating theme.

Special features include a Jackpot of up to 5,000x the player’s wager, Wilds, Scatters, Respins, Multipliers, and a Free Spins bonus game.

Scatter symbols land on reels 1, 3, and 5. Landing one on each of the three reels simultaneously will unlock the Pick a Pot bonus feature. This is an interesting reward, as it allows the player to pick from any of the three options below: