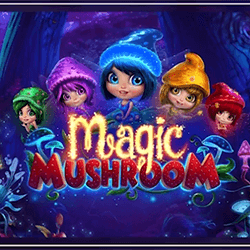 Magic Mushroom is a new pokie from RealTime Gaming that offers 3-reel, classic gameplay along with modern elements and graphics that should make it popular among players that are looking for new-age pokies that offer simpler gameplay. The game is set across 3×3 reels with 27 different ways of forming combinations rather than standard paylines. Players can expect potential wins as high as 540x the total stake, along with a number of interesting features, such as wilds and respins.

Magic Mushroom provides 27 ways to win, meaning that combinations can be formed in whatever direction the correct symbols land on in the reels, with exact positioning not being important. The Magic Mushroom is the wild symbol of the game, and it can be used by players to complete combinations that would otherwise be impossible to finish.

The respins feature is the other major bonus, and is triggered when the second reel is completely covered by wilds. Once covered, the wild reel becomes locked in position, while reels 1 and 3 are covered by two types of symbols, one being empty space, and the other being chosen at random. This is where the player is able to form a full screen of winning combinations, with the aim to try and get to the highest payout of 540x the total stake. While the game doesn’t offer many features compared to others, its classic gameplay and mixed bonuses should provide plenty of entertainment.