Rolling Roger Will Bowl You Over 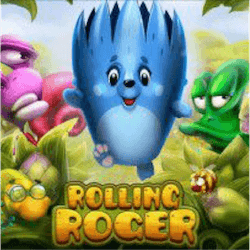 Habanero have released a new online slot game called Rolling Roger. It may seem oddly familiar as the slot features a rolling blue hedgehog as its protagonist, quite in a similar fashion to Sega’s blue mascot, Sonic the Hedgehog.

Even though there isn’t a ghoul or a ghost in site, Rolling Roger still captures the feel of Halloween with its warm orange autumn colour palette. Habanero have really created a great looking game. It is fully HTNML 5 compatible so you will be able to play Rolling Roger on mobile devices as well.

The main feature of the game is referenced by the title. Roger, your hedgehog partner will roll across the reels after every spin. The track he rolls along will light up and functions as the game’s active payline. Additionally each time Roger roils across a high value symbol, you will collect one acorn.

Each acorn collected will count as one free spin when this feature triggers, but you will first need to collect 40 acorns. While the free spins feature is active, 5 acorns can randomly be used to turn the entire set of standard reel symbols wild, leaving the high value symbols to potentially create winning combinations. This is a very unique Free Spin round, which should initially be a big draw for players.

The In Game Features

While on first inspection Rolling Roger doesn’t seem to offer anything new, by a few spins in you will become hooked by the engaging Rolling Roger feature. Some fans have complained about the game’s slower pace however. Since you see Roger make his reel roll after each spin, it may be frustrating for some to sit through the unskippable animation, but it is definitely not a deal breaker.

The news of this new slot release follows a busy month for Habanero. They also released The Dead Escape and Scruffy Scallywags this month to great acclaim. Habanero also signed a recent deal with Vulcan Vegas to provide gaming content.

Vulcan Vegas praised Habanero in a press release, stating that they have a lot of respect for Habanero’s innovative features and varied math models for their games, which is always refreshing for seasoned players.

Habanero’s expansion into new markets continued most of this year with new partnerships cemented with Boos Gaming, EscapeBET and 1Xbet. The industry will be looking forward to seeing what Habanero delivers at the EIG exhibition planned for the end of October. Fans are expecting to see a promised 75 new slot games, 10 new table games and 10 new video poker games.