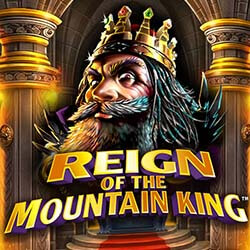 Good news this week is the announcement of an upcoming new release by Scientific Games. The prize developer announced that they would this December be adding yet another stunning title to their Mountain King series of pokies. Following the release and popularity of Rise of the Mountain King last year, they’ll next be adding Reign of the Mountain King to their impressive portfolio of online casino games.

On offer will be 10 active paylines and a 5×3 reels setup – all boosted with a top Jackpot of an incredible 38,3278x the wager, which is a rather incredible offering by any standard.

Multiplier Wilds, Respins, and a 96% RTP complete the winning showcase of bonus features.

Triggering the Respins will mean landing at least 3 x Wilds on the middle three reels. Once the feature has been triggered, there’s even more cash to be won from the triggering Wilds turning sticky. What’s more, in addition to also turning sticky, any new Wilds landed during the course of the feature will mean 1 x additional Respin per Wild added to the remaining tally of free games.

But the Wilds aren’t the only symbols to look out for. Collectable Gems, too, are a great addition to the game as these result in an increase to the Multiplier values of Wilds. Up to an 8x Multiplier value can be secured in this way.

As for the look and feel of SG’s new pokie, the theme remains medieval. This will make it a great addition to any fantasy-lover’s list of favourites.