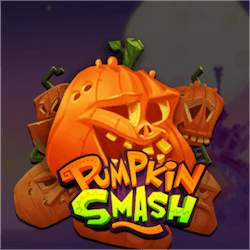 Yggdrasil has surprised fans this October with the release of their latest pokie called Pumpkin Smash. This great title definitely takes its inspiration from Halloween with the inclusion of carved and decorated pumpkins in the game’s main bonus feature, but this title is actually much more influenced by the Mexican festival of Dia De Muertos or the Day of the Dead.

The instantly recognizable skull iconography that permeates all aspects of this Mexican festival is prevalent in the reel icons of this unique pokie. The game has a really eye catching look. The reel symbols and backgrounds are very detailed and atmospheric even though the game’s sound effects are quite generic.

So far fan response has been overwhelmingly positive. Most fans love the unique theme of the pokie along with the solid game play. Yggdrasil looks set to have another great title for their library but the industry doesn’t except any less by now from this one of a kind developer.

Pumpkin Smash feature 5 reels with a standard selection of 20 paylines spread across them. This slot features a 96.20% RTP putting it above average in the payout stakes. There is also a 1000x your wager jackpot amount to be won. Since Yggdrasil has included a maximum wager of 100 per spin, this pokie can award pretty massive jackpots.

Pumpkin Smash features a total of 4 high value reel symbols along with substitute Wilds and the usual bonus triggering scatter symbols. If all this sounds like the standard slot setup, you would be correct, but this solid foundation is used to build the game’s bonus features on.

The bonus features in this pokie are all based on a pumpkin smashing mini game. This feature is triggered by the pumpkin bonus symbol. The number of symbols you land on the reels will be the number of pumpkins you get to smash. The pumpkins can contain as much as 20 individual prizes.

These prizes include up to 32 free spins as well as an up to 7x win multiplier. Your other potential prize is a 2000 coin jackpot. If during the Free Spins round you land more of the Pumpkin Bonus symbols, you can potentially unlock another 16 free spins, or another 7x multiplier or an incredible 17 500 coin jackpot.

These great features have been keeping players busy since the pokie’s release. Yggdrasil have done themselves and fans justice with this release.