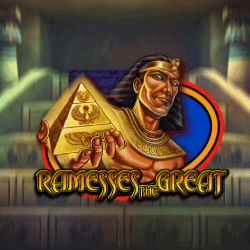 Ramses The Great was the third pharaoh to have ruled the Nineteenth Dynasty of Ancient Egypt. A fierce and feared ruler, he is widely regarded to have been the most powerful pharaoh that ever lived – or at least among those who ruled the New Kingdom. And now that Relax Gaming has recreated the essence of the Egyptian powerhouse into a storytelling online pokie, we get to experience first-hand the majesty of who Ramses really was.

Ramses Revenge pokie not only boasts one of the most popular pokie themes ever imagined, but also does it proud in a unique way very much unlike most others based on Ancient Egypt. Designed to follow a cartoon-style, the game embodies a certain type of magic and out-of-this-world allure. Played on reels 6 reels x 4 rows large, the game makes it possible for players to in a total of 4,096 ways with every spin of the reels.

The highlight of the game is without a doubt the Ramses Revenge Free Spins feature. The key to unlocking a total of 6 free games is the Explorer Scatter symbol. Landing two of these anywhere on the reels in simultaneous fashion will instantly activate the special feature.

What makes the feature even more of a hit is the presence of Mummy Wilds whenever the feature is in play. Mummy Wilds will first off replace the landed Explorer Scatters, whereafter they’ll keep moving around on the grid and creating additional wins as far as they go. Multipliers up to 6x will be applied each time Mummy Wild completes a win.