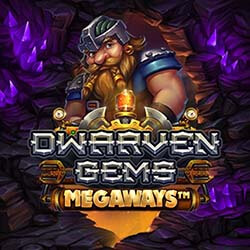 New from prolific iGaming developer this month is an entertaining new online pokie titled Dwarven Gems Megaways. Featuring the uber-popular mechanic from Big Time Gaming, the latest online pokie creation is played on 6 reels and up to 200,704 ways to win at the upper end of the expanded game area.

Special features, symbols, and potentially big opportunities to win have been included aplenty, with everything from substituting Wilds, Multipliers, and a Free Spins bonus feature part of the entertaining mix.

The theme is quintessentially fairy-tale and is reflected as such in the design of the game as well as how the various symbols are crafted.

The four Dwarves are the highest-paying symbols of all, with two of the four being Wild symbols. The first is a regular substituting Wild, while the second, being the Dwarven Bomb Wild, is an Exploding Wild capable of covering an incredible 8 symbol positions on the game’s reels.

The Scatter is the key to unlocking the Free Spins bonus round and is represented by a massive crate of green crystals. Landing 3 or more Scatters simultaneously on the game’s reels from a single spin will instantly trigger the feature – which includes 2 free games for every Scatter landed.

Included also among the bonus features is the Tumble feature. With every new win registered, all winning symbols are removed from a special Horizontal Reel located towards the top of the game area. Multiple wins become possible each time a new symbol takes its position on the special reel.