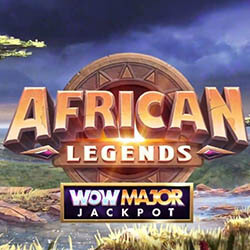 The fact that we could all do with a bit of magic and adventure right about now makes the news of an African adventure-style pokie being in the Microgaming pipeline all the more welcome. Titled “African Legends” and developed exclusively for the casino games giant by Slingshot Studios, the upcoming September release will form part of the Wow Jackpot network. Not unlike every other pokie ever released by Microgaming, African Legends too, will be available exclusively from Microgaming casinos only.

Microgaming and Slingshot’s latest online pokie collaboration will feature a standard 5×3 grid and 243 ways in which to win. Really good news is that the pokie will take on the form of a progressive jackpot game which, aside from potentially landing the actual jackpot, will offer to players the opportunity to bank up to a cool 1,200x their initial bet.

Special features included in the new release are a Free Spins bonus game, a multiplier trail, the Rolling Reels feature, and a special Wild Blast bonus game. As far as special symbols go, the wilds and scatters promise to make the pokie worth every type of player’s while.

The big prize to be trying for is obviously the progressive jackpot, and since its pegged at a minimum value of a cool €50,000, we already 100% sure what we’ll be trying out for this September.

Also really nice about African Legends is the pokies’ particular design-style. Instead of featuring typical photograph-style renditions of Africa’s animal kingdom on the reels, the game’s symbols all appear to have been carved from stone. This adds a nice touch to the pokies’ symbols, which include lions, hippos, rhinos, elephants, and even warthogs.