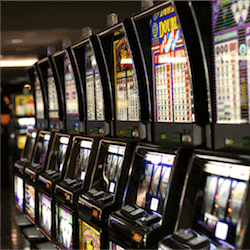 From recent audits it appears that residents in West Auckland are spending more on Pokies than before, this despite the removal of many Pokies from around the region. The New Zealand Department of Internal Affairs stated that across the main types of gambling, including sports betting, lotteries and Pokies, the country has spent $118 million more in 2016 than in previous financial years.

This trend was most prominent in West Auckland. The biggest increase in Pokie playing was in Waitakere Ranges and Henderson –Massey where play increased by 30%.  This despite Waitakere having fewer venues and Pokies games than other regions. They currently have 8 licensed venues and 102 legal Pokie machines set up.

The growth in expenditure in Henderson-Massey is up over 23% across all 16 of their licensed venues. Here there are more than 250 machines set up around the region with these Pokies generating as much as $ 60 000 day.

By comparison in Whau, 18 machines form a 163 total were removed in the area and expenditure has gone down by over 8%. The area as a whole only spent $27 000 a day by comparison.

Local councillors are so far unable to explain what they do not want to refer to as a trend in the two regions. New Zealand has some of the strictest gaming laws in the world and they are fighting an apparent war on problem gambling, but these recent statistics put a spanner in the works.

Players are enjoying locally set up slots and spending more, contrary to the government’s reasoning that people are just passively playing slots simply because they are available. However the PGF is still going ahead with their plans. Bonnie Lovich-Hewit, head of the PGF , still believes there is a direct correlation between the availability of Pokies and the harm they can cause.

Lovich-Hewit has presented the local Henderson Massey council with the PGF’s research and reasoning to continue the removal of local Pokies, despite the revenue they help generate for the local community. This is part of the “Sinking Lid” program that aims to phase out Pokies entirely. The plan is that Pokies are gradually removed and never replaced until the majority of machines are gone.

The local council board are worried however that people would simply move into online gaming if they cannot find Pokies in their local area which means the money that was once poured back into the community will now rather be sent internationally. It has also been raised that the 40% of gaming revenues returned to the local community supported very necessary organisations. Currently the battle is still on going and players are still enjoying Pokies as much as ever.