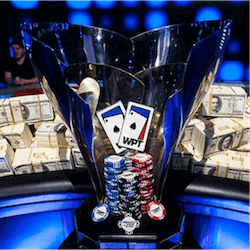 The World Poker Tour is currently in Atlantic City for the annual Borgata Poker Tournament being held at the world famous Borgata Hotel, Spa and Casino. It brings some of the world’s top players to this already legendary venue to compete for $7 million in cash prizes. The tournament will be running from the 17th of September until the 22nd of September and some of the Poker formats being played will include Pot Limit Omaha and No-Limit Hold’em.

The main prize of the tournament will be a $3 million slice of the total $7 million prize pool and naturally most of the attendees will be aiming for that lofty jackpot but the competition is fierce this year. With an entry fee of $15 000 and with the winner guaranteed a place in the WPT Tournament of Champions you would think this event is not for the casual fan but the WPT have provided great accessibility for non-professionals.

Casual players had the opportunity to gain entry to the tournament as there are 9 satellite tournaments running along with the WPT Borgata event where players can opt for buy-ins under $500. New Jersey residents could also stand a chance to qualify for the Borgata event by playing online tournaments specially organised by the Borgata’s online division.

Currently the Borgata Deepstack No-Limit Hold’em tournament is underway at the venue until the WPT arrives. This event is no slouch when it comes to the quality of the players involved. With a $600 buy in and a $2 million prize pool, it is a great appetiser for the WPT Poker Open.

The Open is set to host talented players like Phil Helmuth and Ben Zamani, the WPT 2016 Player of the Year. Fans are also hoping to see JC Tran, Marvin Rettenmaier and Arty Papazyan but many professional players have yet to confirm their attendance, as there are other tournaments on the go at the same time.

Aaron Mermelstein and Marven Rettenmaier are both two-time WPT champs currently taking part in the WinStar Poker Series. Ben Zamani has been living up to the acclaim heaped on him last year by making waves at the WinStar event already. It would be a big surprise not to see Zamani at the Borgata Poker Open as he is currently building his career after the WPT kudos he received.  All in all this year’s WPT Borgata Poker Open should gin deliver incredible Poker action like only the finest players in the world playing at the biggest limit tables.