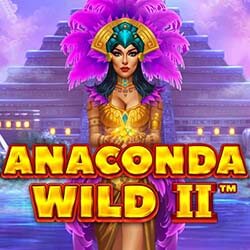 It’s a new year and players get to look forward to an entire show of upcoming new releases from some of the biggest online pokie developers in the industry. Scheduled for release as soon as February is a stunning new creation by Playtech. Anaconda Wild 2 is the long-awaited sequel to the 2018-released Anaconda Wild, by the same developer.

The Anaconda Wild story continues as players go in search of life-changing riches and treasure buried deep within the belly of the jungle. The strong Mayan influence can once again be experienced too, with the pokie having much to offer to fans of a quality storyline and detailed theme.

On the 6×4 reels and 50 always-on paylines players will find a superb selection of symbols. These include several sacred Mayan objects, including a Treasure Chest, Dagger, Goblet, Rings, and Coins, as well as a female character representing mystical Mayan royalty.

Special features and bonus symbols include a Regular Substituting Wild, Special Wilds coloured in Green, Red, and Gold, a Wild Respins game, and Multiplier Wilds. Playtech’s latest upcoming new release certainly doesn’t beat around the bush when it comes to max payout potential. Players will stand the chance of bagging up to 25,000x their bets from a single spin of the reels.

The Special Wilds – being those Wilds coloured in Red, Gold, or Green – are the keys to unlocking the Wild Respins. Once a Special Wild has been landed, a snake will emerge from the centre of the symbol and make its way across the game area – turning more symbols Wild as it goes. Once the snake returns to its original starting position, the Respins feature ends.