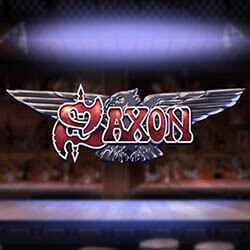 Play’n GO’s most recent big release is quite the new pokie treat. The software giant’s new “Saxon” pokie is based on the music charts-smashing 1977 British heavy metal band by the same name – a band that has sold more than 13 million albums worldwide, and the creative geniuses behind metal masterpieces such as Strong Arm of the Law and Wheels of Steel.

The way the developer managed to incorporate the very essence of the famous band into the theme is quite a thing to behold. The symbols are all representative of the band in their heyday, including imaged recreations of beloved metal vocalist Biff Byford, his famous Harley Davidson motorbike, a biker’s jacket, biker’s helmet, and an eagle. Lower-paying symbols consist of a suite of royals.

And since no music-themed pokie would be considered as success without some music by the band it is based on blaring in the background, players can choose any one of 8 Saxon tracks for getting their spin-and-win groove on.

The bonus feature takes on the form of a Free Spins game, awarding anything between 5 and 15 free games whenever the image of Byford and the image of his famous motorbike both land on the reels during the course of a single spin.

The minimum allowable wager starts out from as little as $0.10 for a spin of the reels and increases to a cool maximum of $100. This means that players can potentially win up to 10,000x their original bet.