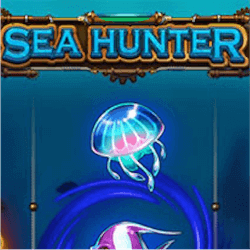 Play n Go have revealed another new pokie, this time with an action packed underwater theme. With a title like Sea Hunter, the theme is definitely not a cute one. While the underwater creatures you will encounter on the reels do have a cartoony look, the overall tone of this pokie is serious.

What makes Sea Hunter so fast paced and immediately thrilling is its small reel layout. It uses a simple 3 reel 5 payline design very similar to classically styled fruit machine games. This makes the game ideal for mobile gaming as the graphics remains crisp and clear on smaller screens. While the payouts won’t knock your socks off, the low minimum wager and quick, action packed game play certainly is very appealing.

On either side of the reels you will find two laser cannons with a gauge on each one. With each consecutive win you land on the reels, you will power up the gauges on these cannons which will in turn trigger the guns to fire onto the reels and activate special effects.

The only downside here is that non-winning spins reduce the cannon gauge down to zero. The cannon gauge can get 4 charges, each level adding special reel modifiers with some great looking effects from the cannon fire.

The first level effect is called the Growth Gun. Two wins will activate this effect that will see the cannon fire at a random symbol on the reels. Whichever symbol it hits will become a higher valued symbol. The only exception here is the Wild symbol, which will not be affected by the cannon. The highest value in game symbol is the whale icon, if it gets hit by the cannon it will be transformed into a wild.

If the Cannon gets upgrade to its second level the Sticky Shot gets activated. When the cannon fires at a random symbol, it and all other matching symbols will become sticky on the reels while they re-spin. This effect also counts with wild symbols. Any wins registered during this re-spin feature will register on the cannon gauge.

If the cannon becomes powered up to level 3 the Wild Warhead feature becomes active. It takes 5 consecutive wins to trigger but when it does up to 3 wild symbols are randomly added to the reels.  The final level is the 4th level and it is called the Multiple Mortar Gun. The Win Spin feature is activated which guarantees a win on your next spin while the cannon fires onto the reels adding an up to 15x multiplier. Sea Hunter will be going live on the 14th of December.