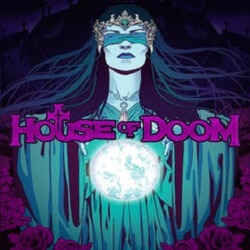 Kiwi pokies fans that enjoy all things gothic will love Play ‘N Go’s latest release. House of Doom takes the brand back to its roots with a game that’s more traditional than most, but that boasts an awesome dark theme.

The new release is in complete contrast to the other recent pokies that have come from Play ‘N Go, as titles like Hugo 2 and Racoonz have been light, bright and fun, rather than veering towards the more serious side of the occult.

This 5 reel, 10 payline pokies game is filled with spooky symbols such as skulls, goat heads, burning blood red roses, crosses and pentagrams and players are whisked inside a haunted house where they have to fight to survive their ordeal, while lining up big wins along the way.

House of Doom may seem a bit of an unusual theme for a pokies game, but Play ‘N Go have collaborated with the doom metal band Candlemass to create the game. With other providers like NetEnt releasing games featuring Motorhead, and with developers trying harder to appeal to a younger generation, it is not to surprising that Play ‘N Go have gone in this direction. Of course Candlemass also provide the sound track for this pokies game, and heavy guitar riffs and powerful music accompany every dark and gloomy spin.

The game is currently available at several Play ‘N Go casinos and looks set to attract a whole new generation of players with its gothic theme.