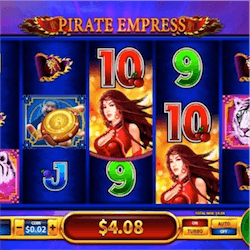 Pirate themed pokies are of course widely popular with people all over and why wouldn’t they be. Tales of swash buckling action on the oceans of the world have fascinated audiences for centuries. Most people picture pirates from the west with parrots on their shoulders and flying the Jolly Roger but what many people don’t realise is many rich trading country had their own pirates.

This new pokie, Pirate Empress, addresses that by having the game focus on Chinese piracy, most notably the exploits of the legendary Madam Ching, also known as Ching Shih. This legendary figure at one point commanded over 300 ships along with 40 000 crew members.

She clashed with the British and Portuguese Empires and even with her native government, the Qing Dynasty. To cap it all she is one of the few pirates to actually retire from her life of crime, making her debatably one of the most successful pirates of all time.

Now thanks to the Playtech partnered Skywind Group, Madam Ching’s legacy lives on in their new online pokie game, Pirate Empress. Tossing out the traditional payline system, Pirate Empress instead uses a 243 was to win system making your pokie experience a bit more volatile on the 5×3 reel layout.

The Empress Rewards Her Crew

Madam Ching makes her appearance on the reels of Pirate Empress as a substitute wild icon but she is also active in the bonus game here. When you land 3 of the pirate ship scatter icons anywhere on the reels, Madam Ching will appear and offer you one of 6 special bonus options. You can pick how you want your bonus feature to play out from these options.

Each option offers a set of free spins with a set of multipliers that can activate and be applied to your wins. The more spins you take, the lower the multiplier value and vice versa. The maximum amount of spins you can get is 28 while the biggest multiplier on offer stands at an impressive 88x. If you are feeling extra lucky there is also a Mystery Option. This feature will randomly pick one of the 5 spin/multiplier combos to activate, adding some extra excitement to the on screen action.

Players should also look out for Madam Ching’s pirate flag that will appear stacked on the reels and offers some massive payouts, all multiplied by your total staked wager. The Skywind Group have delivered an excellent, historically themed pokie here and it is well worth a few plays. Find it at online casinos now.