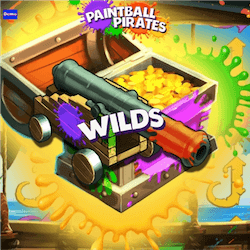 Do Not Dodge The Paintball Pirates

Nothing says freedom like the wild open seas with nothing above you but the blue sky and nothing below you but the blue ocean. Paintball Pirates by Games Warehouse sends you out to uncover some pirate treasures on the stormy seas.

Honestly what the Paintball has to do with piracy is anyone’s guess. All it really means is that the reels explode with colour after every win and those explosions look great on any HTML 5 compatible device including Smartphones and desktop computers.

The jackpot bonus is the only let down with Paintball Pirates, it’s a relatively small sum of 5000, which by no means is little, but there are many online pokies out there with much more tempting prizes. That said there are wager limits here to suit all budgets, with bets starting at 0.2 and capped at 200.

A standard 5×3 reel layout will greet players and there are 20 paylines to play around with. Games Warehouse has done promising work here. If this title doesn’t garner more acclaim and industry attention for them, nothing will.

The wild cannon feature brings a pirate ship’s cannon on to the reels, firing wilds, expanding wilds and multipliers onto the reels. Landing the rainbow coloured treasure chest on the centre reel activates the free game feature.

Ten free spins will be yours to take when this activates but you will also be able to retrigger this feature. During the free game feature the wild cannon will activate more regularly and fill the reels with special wilds which can mean huge rewards.

The adventurous bonus game sees players trying to guide their pirate ship to the infamous Plunder Isle. This is the secret location where untold numbers of pirates have buried their booty. In your perilous journey across the oceans, you will roll a set of die to determine where you go and where you stop on your boat journey.

Many islands you visit on your way to Plunder Isle contain cash prizes, while other islands contain cannon towers that can sink your ship. Once you reach the infamous island you can pick a spot on it to dig in. You can find win multipliers or cash prizes on the island but if you dick up the pink skull, the feature ands and you will be returned to the base game reels to continue