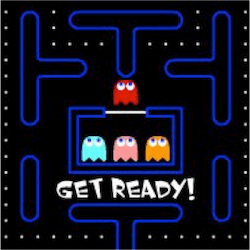 Pac-Man may not have been the first arcade game but it is easily one of the most fondly remembered. It currently holds the Guinness World Record for most popular arcade game and it has spawned a vast array of games, media tie-ins, merchandise and now after many years, a casino game.

Software developer Gamblit have announced that they will be producing a Pac-Man inspired casino game and most amazingly of all, they will be working hand in hand with the original developer Namco. It is very rare that a licensor and licensee work together in a casino based game so expectations are running very high indeed.

Precious little detail has been revealed about the game set to be officially released in 2018, with a preview of the game to be revealed at the 2017 Global Gaming Expo in October.

What has many fans excited is the revolutionary approach that Gamblit have taken with this enterprise. The game will be released on their custom Model G interactive games table. It supports up to 4 players simultaneously and from what we have seen from the released screenshots, players will be able to stand around the same machine and enjoy some real money Pac action.

There also appears to be a wheel-of-fortune style bonus game with a jackpot of up to 600. What caught most online commentator’s attention was the retro styled graphics. The game looks just like the original arcade game but with some additional 80-‘s flair and some eye catching neon lighting effects.

Namco’s Executive Officer, Mr Yoshiyasu Horiuchi reiterated the popularity of their character, Pac Man and said that the Pac-Man Battle Casino, to give the game its full title, will appeal to a wide audience and the addition of the real money play aspect would be quite intriguing for many gamers.

At the moment this title is only planned for land based casino release but since Namco already has a footprint in the mobile gaming market, it won’t surprise anyone if an online casino version is planned.

Perhaps there may even be a Play store version soon as currently Google are trialling real money betting apps in their stores. From what we have seen so far, this game is already a hit, but we will have to wait until October to get a real look at this game and the features it may hide.