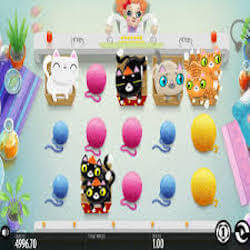 If you have ever played a Thunderkick slot, then you will know what to expect with their latest pokie, Not Enough Kittens. Thunderkick is one of those rare developers where even though each of their games is completely unique, they still feature a common thread throughout them, which makes this undeniably a Thunderkick experience.

While Thunderkick is yet to achieve the same level of fame and notoriety as say Yggdrasil, they have still managed to bring a breath of fresh air to the pokie market which is very very welcome. From the moment you first start playing this title you can’t help but smile. The big eyed cats look quite ridiculous on the reels and the goofy soundtrack just further compounds the crazy aesthetic.

This pokie has a simple 5×3 reel layout but Thunderkick have added 35 paylines meaning there is ample chance to win a few cash prizes. Players will be able to wager a maximum of 100 per spins and there in an in-game jackpot amount of 100x your staked wager.

As with all Thunderkick games, there is a definite lack of special features, which is probably one of the main downsides to this developer. They will certainly get themselves more well know if they packed a few more bonuses into their games.

The reel symbols are a collection of cats that come in single and double cat varieties. The more cats packed onto the icons, the higher that symbol’s value. The standard symbols are rather amusingly made up of a variety of different coloured balls of yarn, but unfortunately we never see the kittens play with said yarn, which would have made this pokie a must play for many people.

The special features are pretty sparse, first off there are two kinds of wilds in Not Enough Kittens. There is the single wild and the double wild. When they form part of a winning combination they apply a 2x multiplier to it. During the Free Spins feature these wilds will appear stacked on the reels.

The free spins also come in single and double varieties. Rather appropriately these bonus icons are cat flaps with a giant F on them. A minimum of 3 icons are require to activate this feature and players will get 10 free spins, but if you land more scatters on the reels you can play with up to 25 free spins.