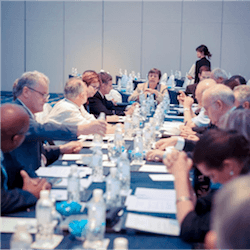 The International Association of Gaming Regulators kicked off their conference this week on the 16th. This year the event is held in Johannesburg South Africa. A number of prominent gaming industry members in a variety of regulated markets meet every year for the conference.

Director General Atie Hamar announced that they will be retaining Norway’s gambling monopoly model in the region as it is the safest method for both players and operators. He also reiterated that Norway will be doing its best to protect its regulated local market from outside operations.

At the moment there are two state sanctioned entities that run and regulate all gambling activity in Norway. Norsk Rikstoto manages all horse racing gambling while Norsk Tipping runs all other operations.

Norway tries and keeps out international companies by not issuing licences to them and as such the lucrative market has been a very big lure for some. There have previously been talks to offer contracts to the bigger international brands but with his words at the IAGR, Atie Hamar has essentially sealed the fate of international operators.

This decision follows a state investigation into the efficiency and efficacy of the current monopoly system. The report’s findings clearly showed that the current model has been the most lucrative and rewarding for all parties involved. Players have been kept safe and protected, while local businesses and communities have seen revenue streams returned to them.

The Norway model has also been used by Sweden and Finland to great success but there have been grumbling from the EU. They feel the monopoly markets could be detrimental to business growth and market fairness but they have not made much of a fuss about it.

Sweden’s own recent study into their local gaming industry found in contrast that the industry would benefit more from licensing international companies. Rumours now abound that Sweden may abandon their monopoly system by 2019.

It is believed that the gray market has been steadily growing in Sweden and now the country is forced to adapt or lose. Norway however are not part of the EU and as such has had no pressure from the EU to alter its current business model. At the end of the day, Norway has seen tremendous success with their gaming model so there is no real reason for them to start implementing drastic changes.