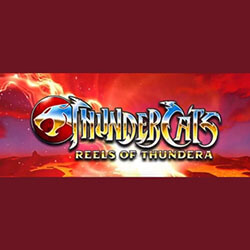 Reels of Thundera is the latest online pokie from BluePrint Gaming that takes inspiration from the popular television series that gained traction during the 1980’s. The game is set across 5 reels and 20 active paylines, and its biggest payout offers places as much as 10000x to the player, but the RTP is currently sitting at 95.73%. Along with this, the pokie offers six random modifiers that could trigger at any time during normal pay, along with bonus games and the chance of earning different types of free spins.

The stacked game logo is one of the symbols that the player will come across often, and can land in large groups, allowing the player a chance at the pokies’ top jackpot that offers 50x the stake. Wilds are included, and function as standard wilds, allowing the substitution of all other symbols, and are also able to form their won winning combos, allowing for as much as the jackpot icon.

There are six different reel modifiers that are triggered at random throughout the base game. They land through a feature called Awaken the Eye of Thundera. Some of the modifiers include Tygra, with wild reels, Lion-O, extra wilds, Panthro, where 2-5 reels sync, Cheetara, which shuffles the symbols, Wily Kit and Wily Kat, and Snarf, which puts extra scatters on the reels. The scattered logo works as the trigger for the bonus feature, which has six different options. From here, players can claim a number of free spins.