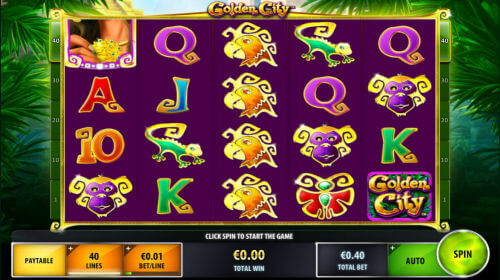 The Golden City is the newest addition to iSoftBet’s gaming library, and takes its inspiration from the ancient Mayans, with much of the focus on temples and pyramids from this lost civilisation from South America. The game consists of a standard layout, with 20 lines and 5 reels. ON top of this, the Trail Bonus is the game’s most prominent feature, which the player can use to unlock big prizes. Exploding wilds and symbols are also present, along with free spins and scatters, and prizes of up to 1000x the total stake are up for grabs from the Golden Pyramid Feature.

The exploding winning symbols are an interesting feature that sees the symbols explode and leave the reels before being replaced by new symbols, similar to cascading reels. Wilds are also available in the game, and can land anywhere on the reels where they can be become stacked and cover an entire reel. They then become unbreakable, and come with a respin feature that works on the reels to the left of the wild.

The Trail Bonus is triggered by landing three scatters anywhere on reels 1, 3, and 5. The trail is able to offer the player a number of special keys that they can use for the bonus game, but instant wins are also possible through the trail bonus, along with free spins. The Golden Temple offers players a wheel that they can spin, where they will be given random prizes depending on where the wheel stops.