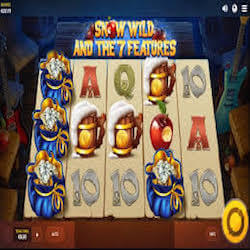 The New Snow Wild And The Seven Features Pokies Game

Every now and again a slot comes along which bucks the trend and does things a bit differently. Snow Wild and the 7 features is just such a game. Inspired by the classic children’s story of Snow White and the 7 dwarfs, this slot turns that classic pristine image of these characters on their head and makes the Brothers Grimm’s classic characters into more adult friendly figures.

In this pokie Snow Wild is just that, a wild lady who sports a bevy of tattoos and hangs out with the most rock ‘n roll dwarves you have ever seen with one of them styled to look just like Slash, the guitarist for Guns ‘n Roses.

The 7 features mentioned in the pokies’ title refer to the fact that the main bonus game will have one of the dwarves apply a special feature to the reels. The reels feature the standard 5×3 layout with 20 paylines, but the reels are tilted at an angle to the screen giving this pokie a unique look. Just as we have come to expect from the developer, Red Tiger Gaming, the maximum wager limit here is huge, topping out at 500 per spin.

The main bonus feature is the Lucky Wheel bonus. This feature is the gateway to all 7 bonus games. The wheel is surrounded by Snow Wild and her 7 companions. When you spin the wheel it will land on and activate the relevant feature.

An innovative pokie that’s sure to thrill, this is one release every player needs to try.