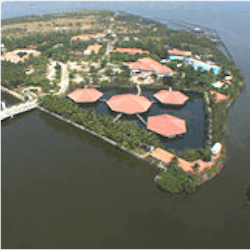 The Philippines are potentially building a massive billion-dollar resort on the famous Kawit Island in the country’s Cebu province. The project would see a resort, hotel, casino and other amenities built on the island. JG Summit Holdings is the company planning the project, which would make a 1000 room hotel available to tourists.

Cebu City mayor, Tomas Osmena revealed the plans to the public and reiterated that the investment would be a massive boon for the local economy. It is know that JG Summit will be working with a foreign partner on the construction project but so far details are scarce, as the project has not been officially approved. So far the state and JG Summit are in proposal talks.

A main driver for the investment project is to drive up property prices in the area. The Mayor has said that it will positively impact the South Road Property region built on recently reclaimed land. This 300 acre area would greatly benefit from the Kawit Island project.

The construction timelines if the plans are approved would be around 3 years. The Mayor projects around 8000 permanent and temporary jobs will be created with the project with exponentially more following the completion of the project as it would certainly lead to even further investment and development which would drive up tourism, business and general quality of live for the citizens of Cebu.

On top of all this, the city will be collecting around 15% tax revenue from the resort and amenities, which would be an incredible boost for the city which could lead to further infrastructure expenditure and more. As already stated the Mayor reiterated that he is open to other proposal from developers and investors.

The project has not been finalised yet until it is presented to residence to hear their opinion. So far it seems that the project will meet with public approval. The major is a trusted figure in Cebu and the benefits of the project are clear. Most citizens are worried about corruption and whether the benefits would truly be felt by the man on the street.