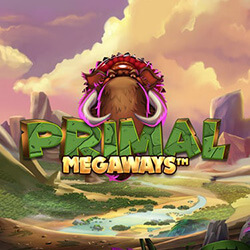 Primal Megaways it the latest pokie from Blueprint Gaming, and will transport players back thousands of years into the past during the stone age where mammoths, cavemen, and sabre-toothed tigers will roamed the planet. With the developer’s trademark Megaways feature, along with a couple of bonus rounds, this latest pokie is a welcomed addition to their ever-growing library of games.

The Blueprint Megaways feature will involve a number of ways that can be utilised to win that can shift on each spin that’s made in the game. For example, in Primal Megaways, there are 46,656 ways to win on every individual spin, which is a much more tempting prospect than the conventional payline method.

The number of Megaways that are in play will differ depending on the layout of the symbols on the reels at any given time. There is enough space for as many as 6 reels as well as 6 symbol rows, but the reel positions can adjust themselves to fill up to three places, which can change how the player wins for every round. The symbols on the reels include a range of different beasts, such as mammoths, sabre-tooth tigers, moose, and many more.

There are also a number of bonus features, along with the Primal Bonus symbols that can be found across the reels and can trigger up to 30 free spins with multipliers attached when three or more land at the same time, meaning that winnings can add up extremely quickly.