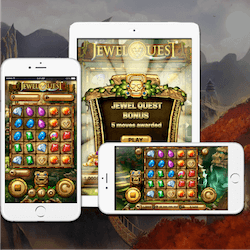 Old Skool Studios, a Canadian software development company has released a new title this week called Jewel Quest Riches. This is quite an innovate release that makes use of a levelling up system to add more replay value to the standard pokie experience.

Many developers have tried to implement elements that would encourage more engagement with players and by extension makes the games more engaging. While Jewel Quest Riches doesn’t stretch the concept too far, they have still managed to add enough to make this pokie stand out from the crowd.

The slot reels are set against a backdrop of Mayan temples while the reel symbols themselves are all magnificent and multi coloured jewels that look great. This pokie has been designed to be played on both mobile and desktop devices, increasing the market penetration for Old Skool Studio’s Quickfire compatible pokie.

What also makes Jewel Quest Riches stand out is its very involved Jewel Quest Bonus feature. It triggers with 3 Golden Mask scatter symbols but that is all that is standard about it. You must now face a pick-me screen where you click on one of three golden animal masks which will award you with between 8 and 10 moves on the next play screen.

These moves are used on a gem matching mini game. The idea is to find three matching symbols on the grid in front of you that will unlock the next play area while also banking a cash prize. There are 8 play screens you can move through. Each one awarding its own cash prize. Players will get an additional free move for every 4-5 symbols that manage to match up.

Jewel Quest Riches makes play more rewarding by including a cascading reels feature. This means that whenever you make a winning combination, the matched symbols will disappear from the reels, allowing the symbols above to fall down in the empty spaces.

If you manage to form another winning combination, the cascading reels feature will trigger again, but this time a 1x multiplier is added to any wins. This feature can trigger repeatedly to give you a maximum multiplier of 12x your win.

While Jewel Quest does not do anything that revolutionary, the features Old Skool Studios decide to include really makes for unique play experience. Jewel Quest Riches is currently live at all Quickfire based online casinos.