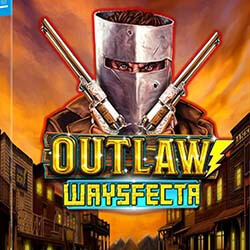 We’re huge fans of Wild West-themed pokies as well as titles with expandable game areas, meaning increasingly more ways to win potentially life-changing sums of money. And the latest pokie headed our way from Lightning Box features both these elements.

Outlaw Waysfecta heads our way this December, meaning we’ll have yet another great title to enjoy over the holidays.

Not only does the latest Lightning Box release feature a fantastic theme and great graphics, but there’s also a top Jackpot of up to 16,010x the wager to play for.

Players will start off on a 5×3 game area and with 243 ways to win. The grid can however expand all the way up to a cool 15,552 active pay-ways, which isn’t bad going at all considering the decent 96.10% RTP. This combination of affairs makes it possible for players to win crazy cash, and as much as $240,000 from a single spin of the reels.

There’s much to look forward to also on the special bonus features side of things.

There’s a Bandit Wild that will act as a substitute whenever it appears on reels 2 to 5. Since it won’t ever land on the 1st reel, it won’t act as a five-of-a-kind type deal.

There’s also a Shootout bonus game included, something which no Wild West-themed pokie should be without. Launched by landing between 3 and 5 Scatters anywhere on the reels, the feature will have players shooting at targets to determine the number of Free Spins awarded.