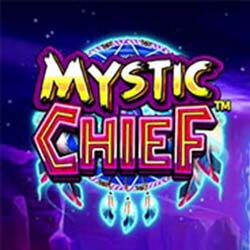 Pragmatic Play’s upcoming new Mystic Chief online pokie is a release players really get to look forward to playing. The game is played on 5 reels and with a cool 576 ways to win.

Included are a top Jackpot of up to 5,000x the player’s wager, a 96.55% RTP, Wilds, Multiplier Walking Wilds, Bonus Symbols, and a Free Spins bonus round for additional wins.

Also included is an interesting feature triggered by landing the Dream Catcher Bonus Symbol simultaneously on reels 1 and 5. This will activate a special randomly-selected number of games during which Wilds will be added to the 3 middle reels. Up to 12 Wild symbols can be awarded in this way, making for enormous potential in terms of possible bonus windfalls.

The Free Spins feature is another instalment bound to make of Mystic Chief a firm favourite among online pokie enthusiasts. Consisting of 8 free games, the feature is triggered each time the Golden Idol Scatter is landed anywhere on the middle three reels.

The game features a strong Native American theme, which has become a firm favourite among iGaming developers over the years. Mystic Chief promises to become a go-to game for many more years to come.