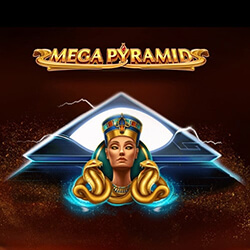 Red Tiger gaming has recently been hard at work trying to move away from their more generic releases that had slowly begun to die in popularity with players, and have instead focused on releasing unique, high volatility pokies that come with plenty of exciting features. Their latest, Mega Pyramid, is a testament to their new focus with a 5000x total stake payout and an RTP of 96.18%.

Players are able to turn the 5000x jackpot into $100,000 if the player has been making use of the maximum bet. On top of this, free spins, the Pyramid Eye, and other features are included in this game that takes place over 5 reels and 30 active paylines.

There are two main options available in Mega Pyramid that set it apart from other recently released pokies. The first is the Pyramid Eye, which automatically applies two types of modifiers to the player’s spins. The feature can be activated during random spins, and will start with the Eye of Provident which fires a beam of light and then gives the player a random symbol, which will then be cloned at random around the reels, possibly completing winning combinations.

Free spins are triggered after landing three scatters on reels 1, 3, and 5, but the Pyramid Eye feature can also be used to gain a third scatter if only two have appeared for that specific round. Landing three scatters nets the player 10 free spins, during which a random symbol can begin to clone itself.