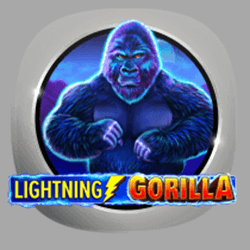 March has come, meaning it’s finally time for the developers at Lightning Box to release their next big title. Lightning Gorilla is a 5×3 pokie with 40 always-on paylines and several ways to win huge cash prizes.

The top Jackpot has been set at a generous 1,250x the bet, and several fun bonus features have been included to help players win. These features include Colossal Symbols, Wilds, Scatters, an Active Reels feature, and Lightning Respins, all of which combine to make for an entertaining iGaming experience.

Wagers vary between $0.40 and a generous $100 maximum bet, meaning players could potentially bank up to $125,000 from a single rotation of the reels.

The game features 4 different Jackpots, with the main one being the Grand Lightning Bolt Jackpot. The other three are called Major, Minor, and Mini.

The Lightning Gorilla Wild is one of the main bonus symbols because of its role as substituting symbol. It will replace all regular symbols to complete winning combinations of three or more symbols on a payline. It also carries a special reward of its own as a top-paying bonus symbol.

Another key bonus symbol is the blue Lightning Bolt Scatter symbol. Landing between 6 and 12 of these simultaneously on the reels will trigger the Lightning Respins bonus feature.

Also included are Colossal Symbols which can land on the reels at any time during game play. These bigger-than-usual icons can occupy positions up to 3×3 large and can also split into Jackpot symbols or Lightning Bolt Scatters.