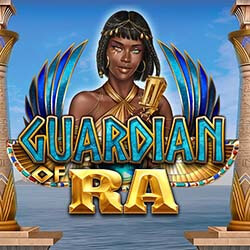 It’s no secret: players all over the globe simply love online pokies based on ancient civilisations. Ancient Egypt, especially, has become a staple favourite for many, and there’s exactly such a pokie coming soon from the developers at Red Rake Gaming.

Guardian of Ra will be played on a classic 5×3 game area, with 30 paylines for banking potentially humungous wins. Bonus features have been included aplenty, including Scatters, Wilds, a Free Spins game, and more.

Exciting also is that the latest Red Rake pokie will feature no fewer than 4 Jackpots: Mini, Minor, Major, and Grand.

Also on display will be a prime selection of themed symbols. These will include Panthers, a Female Pharaoh, Lions, and a colourful suite of Royals. The themed symbols are the game’s high-value icons, with the Royals filling in the gaps for smaller wins.

A great addition is the Pyramid Wild. This special symbol will help complete regular wins. And good news too is that it will appear on all the reels.

There’s also a Scarab Beetle Scatter, which is the bonus key to unlocking the magic of the Free Spins feature. Once the bonus game has been triggered, regular symbols will randomly transform in to Wilds, meaning even more wins for lucky players.

But there’s a second Scatter bonus symbol also, namely the Locked Golden Coin. Landing six or more of these simultaneously will trigger a cool 3 Respins. What’s more, players lucky enough to fill the entire game area with Locked Golden Coins, will walk away with the ultimate prize: the Grand Jackpot.

Guardian of Ra is due for release in March.