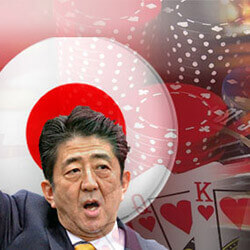 Shinzo Abe, the Prime Minister of Japan, recently held a Cabinet regarding the future of casinos in the country. It proved to be a success on the behalf of casinos, and the Cabinet has since approved the statute that authorizes the commercial integrating of casino resorts. The initial agreement is that three gambling properties are to be built, and taxes are set at around 30% of the revenue for the new venue.

The National Diet, which is Japan’s main lawmaking body, passed their first statute in 2016 which made gambling legal within the country. The new bill called for the creation of stronger regulation surrounding Japanese gambling, which eventually led to the new bill that was recently set in motion.

Japan has now become the main stage for international casinos, and companies such as MGM Resorts and Las Vegas Sands are just some of the few that have turned their attention to the Eastern country, hoping to have their go at licensing out casino venues after the latest bill. Others, such as Melco Resorts, Caesars Entertainment, and Hard Rock have expressed their interest in further casino development in Japan, possibly in the future.

Melco Resorts CEO Geoffrey Davis had this to say, “We haven’t seen anything in the Japanese casino legislation that isn’t manageable.”

While there is no specific date or location where the new casino resorts are to be constructed, the most likely cities in the country are Yokohama, Tokyo, and Osaka.