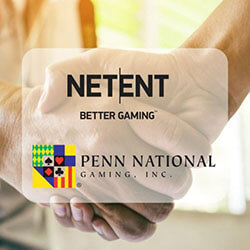 NetEnt has recently announced the signing of a deal between itself and casino giant Penn as its first official partner within Pennsylvania, not long after it revealed the Jumanji-fronted boost that they operator experienced during Q3.

The developer saw share prices increase by almost %15 after it reported a rise in total revenue to SEK 449 million, along with an 11% increase in profits from operating to $19 millions for the three months leading up to the end of September.

This quarter marks the first full period since Therese Hillman was appointed as the permanent CEO of NetEnt, who oversaw one of the supplier’s most successful game brands yet in the form of Jumanji. They also launched a new lottery platform with British Colombia’s Lottery Corporation in Canada, as well as Norwegian Norsk Tipping, followed by the signing of their first customer in Lithuania.

NetEnt has also begun to offer a range of games on Hard Rock’s newly formed online website within the state of New Jersey, and has just announced that its signed on their first customer in the Pennsylvania market, which is on the cusp of coming live for the first time. Their games will become available on the Penn Interactive Hollywood Casino website.

Despite the many successes that NetEnt has been a part of recently, analysts have warned the supplier to remain cautious, especially in a tumultuous European market that has seen its share of new regulations as well as outright bans.