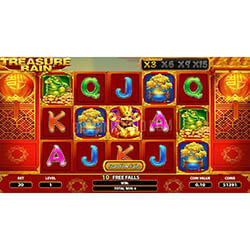 Treasure Rain is the latest online pokie from popular gaming giant NetEnt. The new title makes use of an Asian theme, with most of the focus being on the god of wealth as well as the Chinese culture. The game, despite it’s otherwise commonly-used theme, remains exciting to play, and is in line with most of the developer’s recent pokies, and should be popular among fans of their other titles.

Like with their other games, Treasure Rain makes use of 5 reels with 20 paylines to form combinations on. Along with this, players can get up to 15x multipliers, Avalanches, Free Falls, and a mix of scatters and wilds, all of which can come together to provide some high payouts in the right conditions. With the right combinations, it’s possible to earn up to 35,000x the total stake, and the game has an RTP of 95.97%.

The game makes use of a single feature symbol, but its possible to both in the role of a wild and that of the scatter. The Yin Yang symbol can help the player out, and can act as a substitute when combinations need to be formed. Avalanches are formed during winning combos, where new symbols are added. Along with this, a multiplier is added each time, which can reach as high as 5x. The free falls have more potential, as multipliers are tripled during this sequence. Three free fall symbols on the reels will reward the player with 10 free spins.