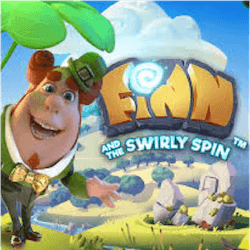 The gaming industry as abuzz this week after NetEnt revealed their new Irish themed pokie, Finn and the Swirly Spin. This is one of the most innovative pokies released this year. It utilizes a unique reel mechanic that you may not have seen before.

Rather than reels that spin down vertically, the pokie symbols are lined up on a concentric path that curves into itself. The reels are still arranged in a 5×5 square grid and combinations are still formed from left to right as well as up and down, but the symbols move completely differently to standard pokies opening the game up for many unique features.

This pokie definitely lives up to the NetEnt graphical standard. It has colourful and bright 3D graphics. You are joined on your spins by a lucky leprechaun who diligently plays the background music on his flute by the side of the reels.

Even though this is not the first time the main theme of Finn and the Swirly Spin has been seen in a casino game, in fact Irish luck and leprechauns are quite common in pokies. What makes this pokie unique is the attention to detail that the NetEnt team has applied and how they have fully explored the possibilities of this new reel design.

In Finn and the Swirly Spin there is a golden star wild symbol that plays a large role in unlocking the main bonus feature of this pokie. At the start of every spin, you will see a key appear at the very beginning of the reel swirl. Whenever a winning combination forms, the matched symbols will explode and the symbols at the back of the swirl will move forward that many spaces.

You will want to form an avalanche of matched symbols so that the key symbol moves all the way to the centre of the swirl where there is a key hole which will award massive cash prizes when it is unlocked. The golden star wilds play a key role in forming these massive chains.

In addition, Finn and the Swirly Spin has 4 randomly activated features. The first is the Magic Transform which will turn all the low value Spades and Hearts into high value icons. The second is the Dragon Destroy feature, which will randomly destroy symbols on the reels causing an avalanche, essentially giving you a re-spin.

The Irish Luck feature adds a horizontal or vertical string of matched symbols, causing a reel collapse. The final random bonus is the Starfall Wilds feature. This will add up to 5 wilds randomly on the reels. Finn and the Swirly Spin also feature 4 unique Free Spins modes that add new backgrounds and unique features to the pokie action.