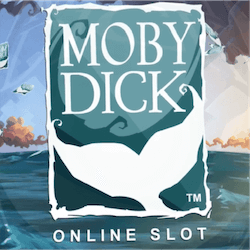 Even though this is not the first game based on the classic novel of the same name, it is definitely the most epic. Moby Dick is the third slot release for Microgaming set for October. This month also sees Microgaming release Monster Wheels and Halloween, both great titles in their own right, but quite different form Moby Dick.

This pokie has been teased since August and player will finally be able to get their hands on it and take it for a few spins when it goes live this month. The pokie looks simply stunning. The art style is a cross between animated cut outs and 3D models.

The sound design does amazing things with the in-game atmosphere. You will be able to smell the salt on the breeze and feel the spray of the ocean waves as they crash against the boat; it truly feels that immersive.

Each time the reel icons land, it sounds like Captain Ahab himself stomping across a ship deck. While you are playing, Ahab will be in his rowboat by the side of the reels, keeping an eye on the slot reels as well as on the ocean surface for any signs of the legendary white whale, Moby Dick.

We have not seen the entire set of special feature to be included in this poke as Microgaming has only revealed a limited teaser trailer but what we do know is very exciting. The most unique element of this pokie is the Win Freezing Feature.

When a winning combination is formed on the reels, they will remain in place and trigger the remaining symbols to re-spin. If more symbols match up to the first combination, the re-spins will continue until a pay out is awarded. This feature can create some potentially huge wins. This unique feature remains active even for Wild or bonus icons.

Moby Dick also includes a Free Spins feature as well as a Gamble feature. The Gamble feature allows you to take a win you just made and gamble it to double its value. Moby Dick will allow players to gamble and double their payouts up to 5 times in a row.

Moby Dick is quite a different beast from the other two Microgaming releases this October. It is a much more subdued pokie that is more focused on getting the right aesthetic for the proceedings. Moby Dick definitely succeeds in having a great atmosphere combined with reliable action. Even though it may get overshadowed during Halloween, Moby Dick is sure to quickly find its audience in the next coming weeks.