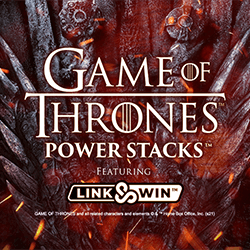 The Game of Thrones universe is a seemingly never-ending one, with a phenomenal new online pokie creation based on the popular franchise coming this month from Microgaming and Slingshot Studios. Game of Thrones: Power Stacks is the latest in the uber-popular series, and while not Microgaming’s first GoT creation, it certainly promises to be one of the star developer’s most enjoyable.

On the 5×4 reels players will discover the possibility of winning up to 25,000x the value of their wagers while striking it potentially rich across a cool 40 always-active paylines.

But that’s not all, because also included are several big bonus jackpot features – including the Link & Win System, a Free Spins feature, Power Stacks feature, Stacked Wilds, and big-money Multipliers.

While bets start out at $0.20 for a starting bet at the lowest spectrum, players get to bet as much as $20 on a single spin for the maximum allowable bet.

The special features are all great fun and certainly very lucrative, with the highlight inclusion being the Power Stacks feature. This feature chooses a symbol that will be landed in stacked fashion at random on the pokie’s reels for the duration of any given round. The higher the value of the symbol, the better the potential payouts.

The Scatter symbol is represented by the Iron Throne symbol. Whenever the Scatter lands between 3 and 5 times on the reels during a single spin, a total of 15 free games will be the player’s reward. Also, up to 100x the wager can be awarded to the player by way of an instant cash prize.