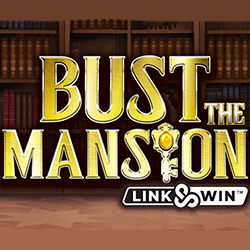 Over the years, we’ve seen several highly entertaining robbery-themed pokies from the developers at Microgaming. Their latest venture is in collaboration with Pulse 8 Studios, with their new Bust the Mansion pokie due for release in February.

Played on a game area 5×3 reels large, players will have 25 paylines for racking up cash wins.

In addition to an engaging theme, there are several bonus features as well as a top Jackpot of a staggering 10,000x the bet to look forward to. This means players could potentially bank up to a life-changing $250,000 from a single game.

The Wild is one of the bonus symbols included and will act as a substituting symbol as well as a high-value one. The prize for landing five Wilds on a single payline is a whopping 400x the wager.

The game’s main feature is called Link & Win, which is Microgaming’s signature version of Streak Respins. This special feature mechanic is triggered whenever 6 or more Money symbols are landed on the reels during a single game-round.

The pokie also features a Free Spins game. Landing between 3 and 5 Golden Key Scatters is the trick to activating the feature, with between 10 and 25 free games the player’s reward. During the Free Spins game, the 3rd reel will be populated by a combination of Wild and Money symbols for enormous winning value.

Bust the Mansion is yet another high quality game to be released by an award-winning studio.