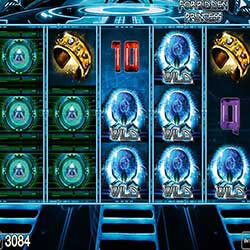 Fans of sci-fi-themed pokies had better listen up because something wonderful is headed their way this coming August. Germany developer Merkur Gaming has just released the pre-launch information pertaining to its upcoming new Forbidden Princess pokie and we’re feeling confident that even players who aren’t all that big on science fiction will be spinning away at the reels sooner rather than later.

The Forbidden Princess finds herself in an alien setting on a strange and faraway planet and looks to the player to join her as she assumes rulership over the ultra-modern cities of the future. There are many treasures to be discovered along the way, including stacked wilds, scatters, free spins, and more.

The futuristic action goes down on a 3×5 grid and 20 paylines for the win. The maximum winnable jackpot amount is a cool 1,000x the player’s initial bet. The RTP is a slightly disappointing 96%, but then again, the pokie makes up for this several times over with its amazing array of special features.

The Forbidden Princess herself is the most valuable symbol of them all. Landing several of her on an active payline will not only fill the payline, but possibly also fill the entire screen with similar symbols. Throw in a couple of wild symbols and soon, the super 1,000x multiplied-bet award will appear clearly in view.

The pokies’ bonus scatter symbol is shown the shape of the ‘City of the Future’. Land three of these anywhere on the pokies’ reels, and 10 free games will be your instant reward.  Other symbols include books, bracelets, orbs, a compass, and even a few futuristic-looking handguns.